A special feature here is that the bright red seeds of ANNATTO provide us with an exceptionally high beta-carotenoid content.
Designation
ACHIOTE (Spanish), Bixa Orellana (Latin), Annatto (English) or also known as the lipstick tree
Origin
ANNATTO originates from the tropical regions of South America, however, today it is also cultivated in India, West Africa and the Caribbean.
Our ANNATTO seeds grow wild in the Ecuador rainforest. They are harvested for us with great care by the Achuar and Shuar tribes. Our promise to you: PHARMOS NATUR is helping to preserve and protect their habitat in the rainforest and their ancient knowledge.
Description
The ANNATTO grows as an evergreen shrub in the tropical regions of the world and can attain a considerable height of up to 10 metres. Its bushy foliage is densely adorned with heart-shaped, bright red seed capsules and lustrous white blossoms. The fruits are covered with short hairs and carry between 10 and 50 tiny red-coloured seeds. 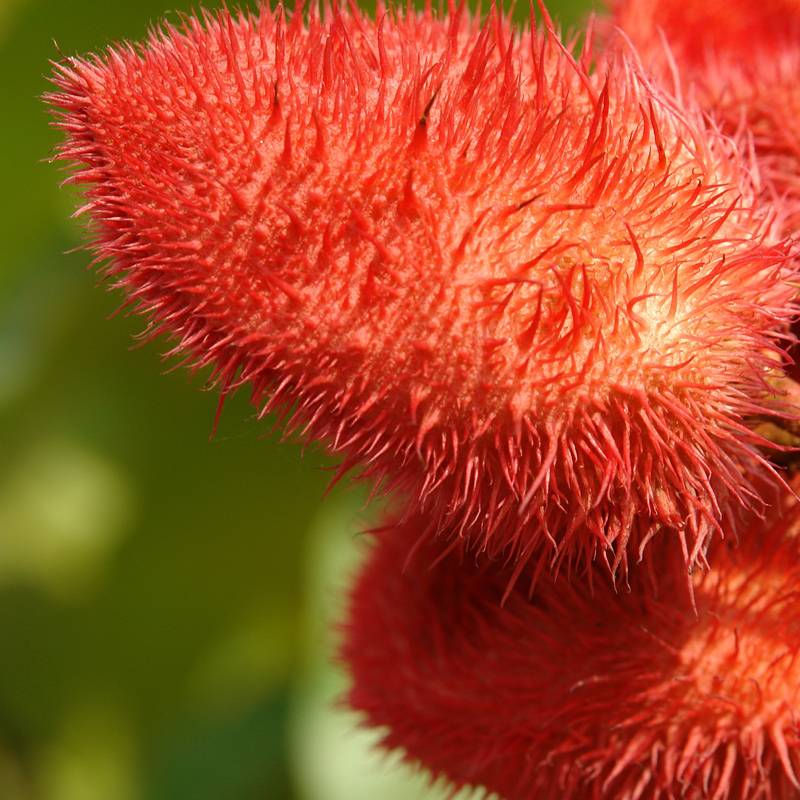 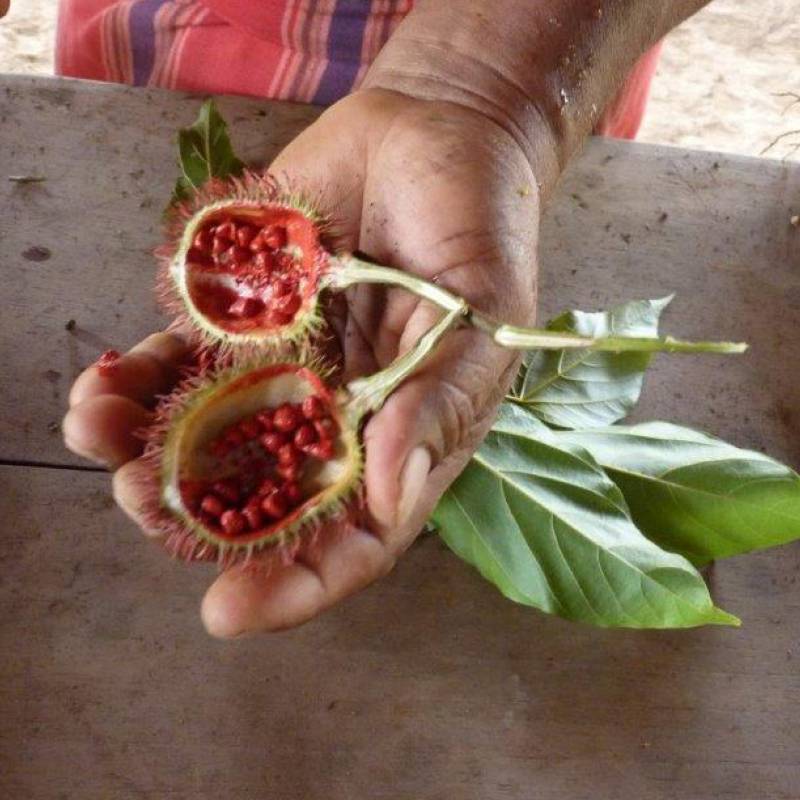 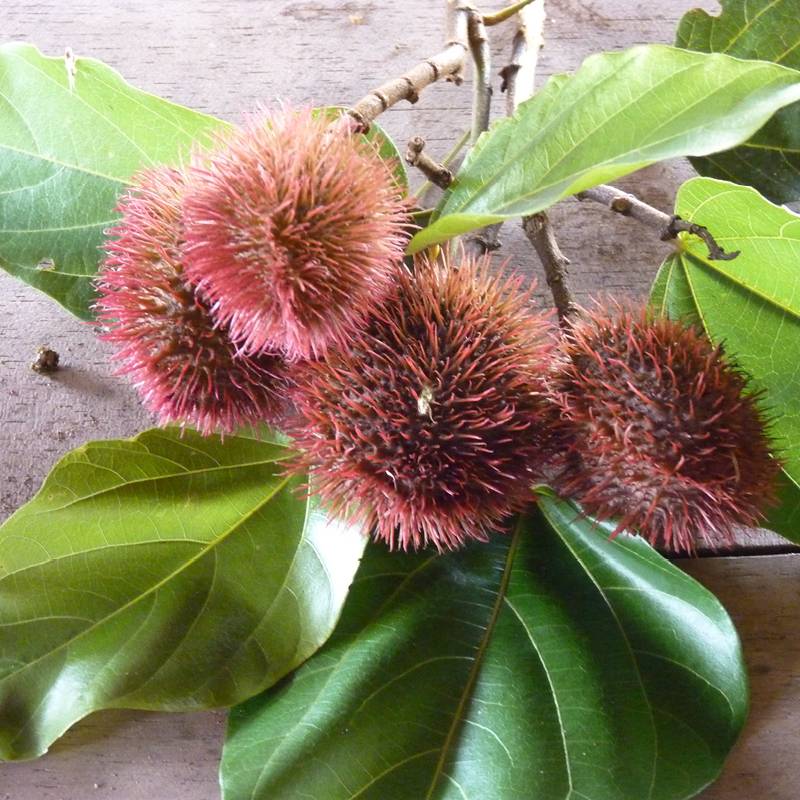 Oil extraction
After the seeds have been carefully dried, we gently mill them and then unlock them with great care. They are macerated in precious oils and cared for according to energetic and rhythmic principles over a period of 28 days, which is a full moon cycle.

Effect
Observing the radiant red seeds of the ANNATTO, it reminds us of the fiery heat of the sun. The association with sun protection is then logical. Modern science explains the connection as carotenoids are largely responsible for the red and orange colouring of vegetables and fruits. They stimulate the formation of melanin in our skin. This enables it to develop a darker complexion from the inside and protect itself from excess exposure to the sun. A special feature here is that the bright red seeds of ANNATTO provide us with an exceptionally high beta-carotenoid content – almost 100 times more than the European carrot.

Additionally, the seeds contain high levels of selenium and tocotrienol, a form of vitamin E. This powerful combination of active ingredients renders ANNATTO an antioxidant par excellence. It protects us efficiently against the free radicals of the solar radiation & electric radiation and thereby prevents premature skin ageing.

Clinical studies have shown that when applied externally, the red colour pigments bixin and norbixin provide particularly effective protection against the ultraviolet rays of the sun.

Traditional use
The indigenous people of the Amazon love and cherish the red seeds of ANNATTO for their protective properties against exposure to sunlight and insects. Used for colouring clothing and food, they also have a firm place in the traditional herbal medicine of Latin America.

An infusion of the young buds, for example, is said to be effective as an aphrodisiac and liver tonic. Externally applied, a broth of seeds is traditionally used to treat skin problems and disinfect inflammations and burns. In Brazil, an infusion of the white flowers is used to treat digestive problems and constipation. In Peruvian naturopathy, the red seeds of ANNATTO are ground into a paste and administered several times a day to alleviate high blood pressure and fever.

Spiritual use
ANNATTO seeds have a deep red glow emanating from the tropical rain forests. What is their message?

The indigenous peoples of Latin America traditionally paint themselves with the red earth of the Amazon for ceremonies or to prepare for war. The colour red means: I AM. It is the colour of the chakra root and symbolises our connection and a sense of belonging to Mother Earth. It signifies courage and resilience. The red earth is also traditionally applied to the skin as sun protection.

The native inhabitants of the rainforest believe that the red ANNATTO is a transformation of the coarse red earth into the ethereal world of blossoms and plants. The plant spirit of the ANNATTO embodies the idea of the protective effect of the red earth and makes it available to people all over the world. For protection from the sun, for protection from radiation. For reconnection with Mother Earth.

We put the ANNATTO to work in our SUN HARMONY sun protection and have developed three wonderful products especially for you – for holistic sun protection from the inside and out.
We respect the finest energetic principles during harvest and processing and ensure that the plants remain in their entirety. In this way, their essential power and the wealth of their active ingredients and light energy are preserved and can work effectively.
The TANNING OIL consists of 100% natural oils with a sun-protective and nourishing effect. The fine composition of black sesame oil, walnut oil, hemp oil, sea buckthorn oil, carancha oil and annatto protects your skin naturally with a SPF 6 and above. ONLINE SHOP
The PROTECT CREAM protects your skin with SPF 30. Pure Aloe Vera raw organic juice instead of water, annatto, Avellana oil, sea buckthorn pulp, Ectoin microorganisms, wild rose oil, magnolia bark, black sesame oil and oryzan oil (rice-germ oil) work together intelligently and protect your skin from sun-induced pigment spots and wrinkles, provide intensive moisture and are strongly anti-oxidative. Zinc oxide provides the legally verifiable sun protection factor SPF 30. ONLINE SHOP
The Q FOOD is our edible sun screen. A natural, smart foodstuff. 100% pure and without additives. Carefully processed whole fruits, berries, seeds and leaves with high light energy (biophotons) and a unique nutrient spectrum combine to form powerful antioxidants. Enabling your body to effectively protect itself from within. 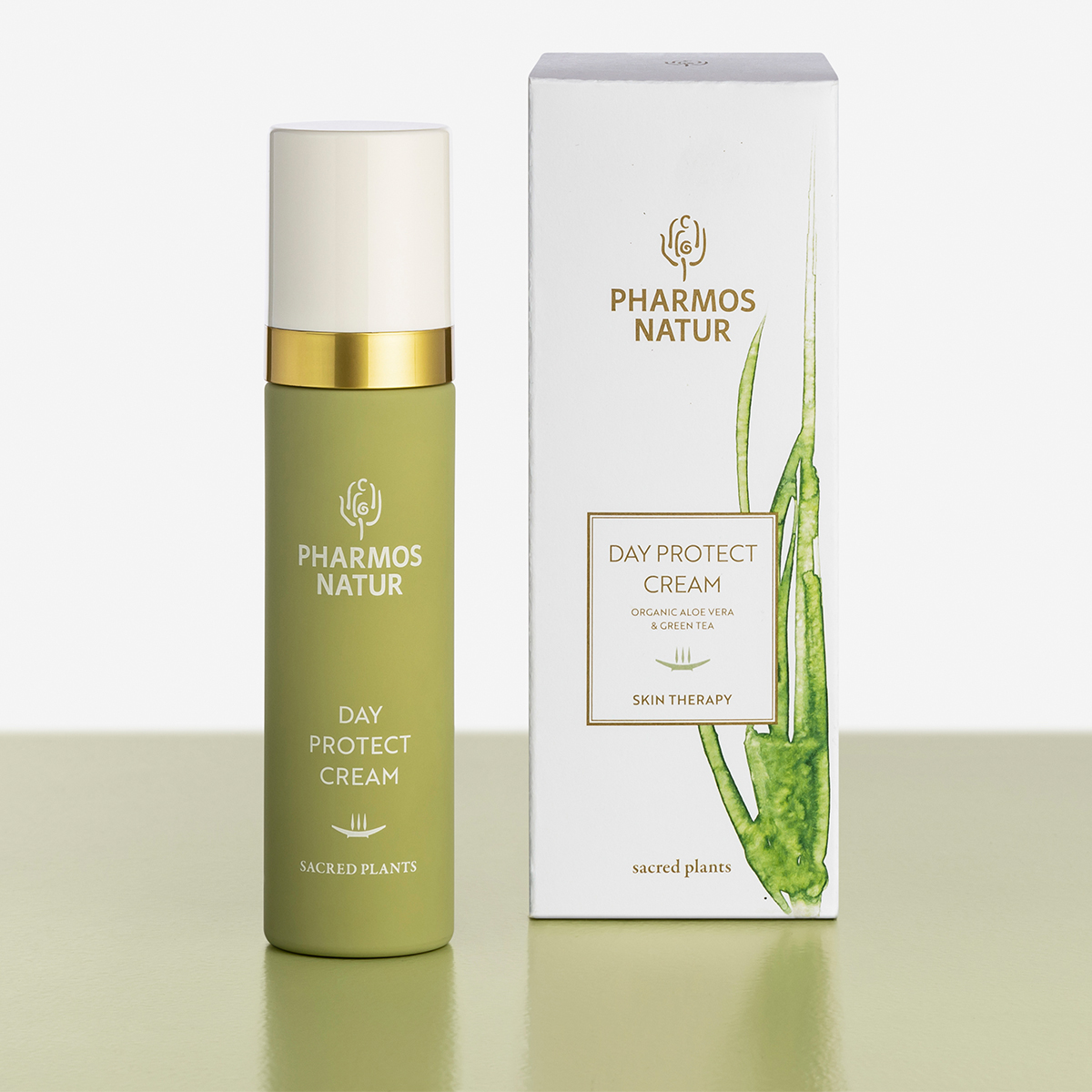 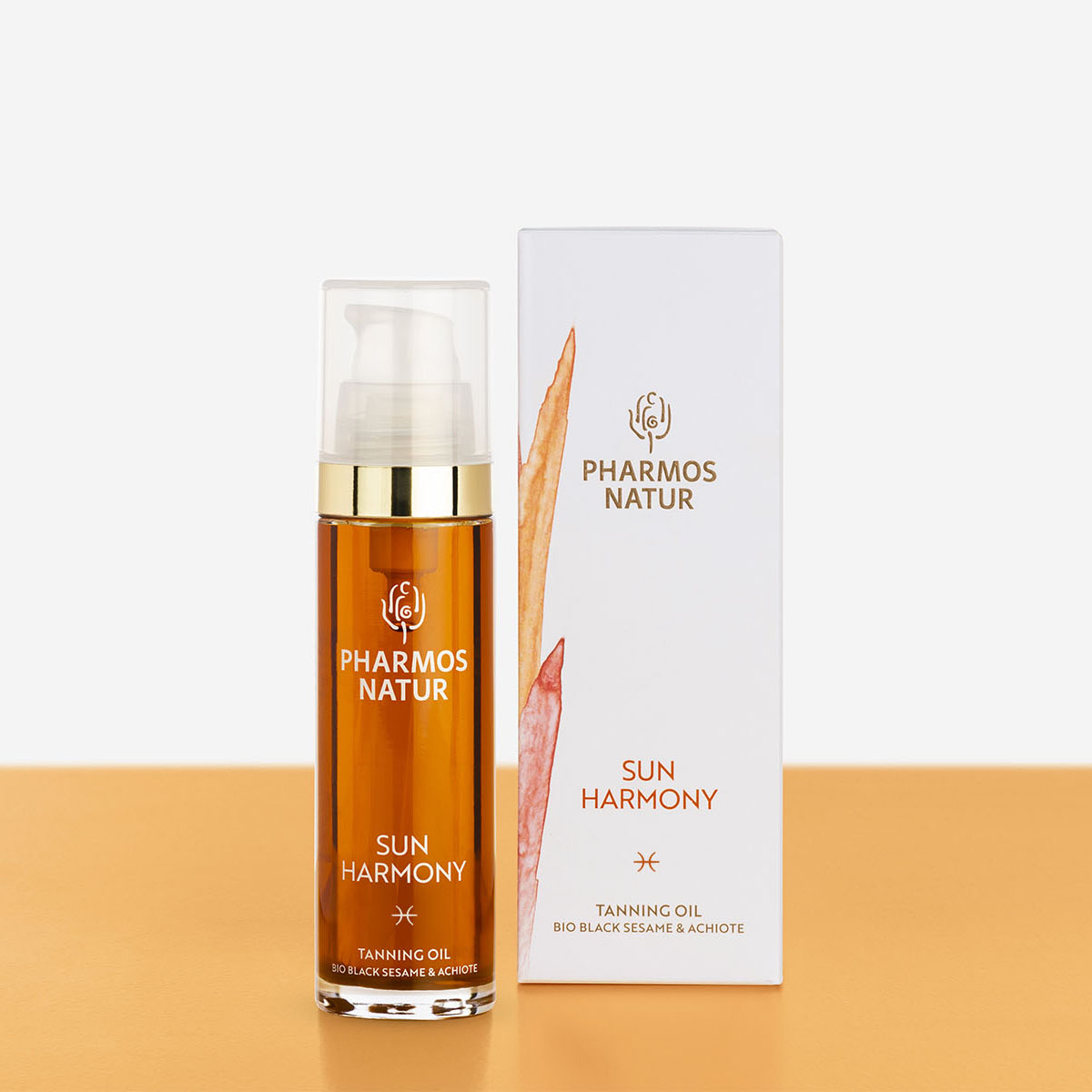